In 1969 Henkel revolutionized the market for consumer adhesives with a new category: the launch of the first-ever glue stick called Pritt. Since then, no paper adhesive in the world has been more successful. The company has sold billions of glue sticks and has continuously expanded its product range under the iconic brand. In 2019 Henkel will celebrate the 50th Pritt anniversary through different activities including its well-known back-to-school campaign in stores and a special initiative for children.

It was in 1967 when the former Henkel engineer Dr. Wolfgang Dierichs saw a woman applying lipstick while travelling. The simple twist-up mechanism gave him a revolutionary idea: “Why not make an adhesive in the shape of a lipstick, that´s quick, clean and accurate?” After two years of development and testing, the company launched the first Pritt glue stick in 1969. The revolutionary product became a big success worldwide and a synonym for the glue stick category in many countries.

Over the last decades Henkel continuously improved the quality and formulation of its glue sticks. In 2000 the company launched the first solvent-free Pritt generation meeting modern demands for safety and sustainability. In 2003 Henkel went even further and launched today´s generation with 90 percent natural ingredients. Already in 2001 Pritt was awarded with the exclusive seal of “Space-Proof Quality”. A rocket ferried a cargo of Pritt products to the International Space Station ‏(ISS) where the glue sticks were successfully tested under extreme space conditions.

50 years of Magic Moments – children as the brand´s core

Since its creation in 1969, the Pritt glue stick supports the development of motor and creative skills of children through glue crafting related activities in school and at home. Thus, Pritt annually inspires children all over the world with its back-to-school campaigns and exciting themes featuring the Mr. Pritt character supported by new products such as the first neon and glitter glue sticks. To celebrate the anniversary this years´ back-to-school campaign will be focused on 50 years of magic moments. To capture that magic, Pritt will launch the new Pritt Glow in the dark glue stick.

Today, Henkel produces more than 100 million Pritt sticks in different colors and sizes per year. In addition, the company offers a variety of innovative products under its global leading brand. The complementary Pritt portfolio ranges from liquid all purpose glues and glue pens to glue rollers and correction rollers. All products are easy to use and enable children to handcraft their ideas and dreams.

“For the last 50 years, Pritt has enabled children to turn their creativity and imagination to reality through the magic of crafting”, says Xavier Martin, Head of Global Marketing and Digital for the Consumer Adhesives Business at Henkel. “In 2019 we will celebrate all those magical moments Pritt has inspired ever since with our employees, consumers and customers through different activities. Therefore, we will lay the focus on our back-to-school campaign in summer and a special fundraising initiative for children.”

For many years, Pritt is also actively engaged in improving the quality of education, not only inside the classroom of consumers, but also that of children around the globe. For example, together with Plan International Pritt has constructed and renovated two schools in unprivileged areas in Brazil. Together with the Fritz Henkel Stiftung Pritt this year will actively support children´s education with the internal initiative “We craft for children”. With this fundraising initiative Henkel employees around the globe will have the opportunity to craft a figurine expressing what they wanted to be as a child. The three most actively participating countries will receive a donation for a local organization in support of children´s development and education. 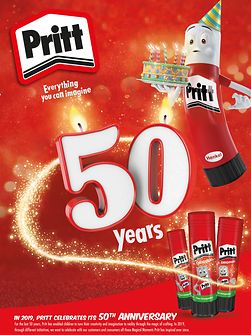 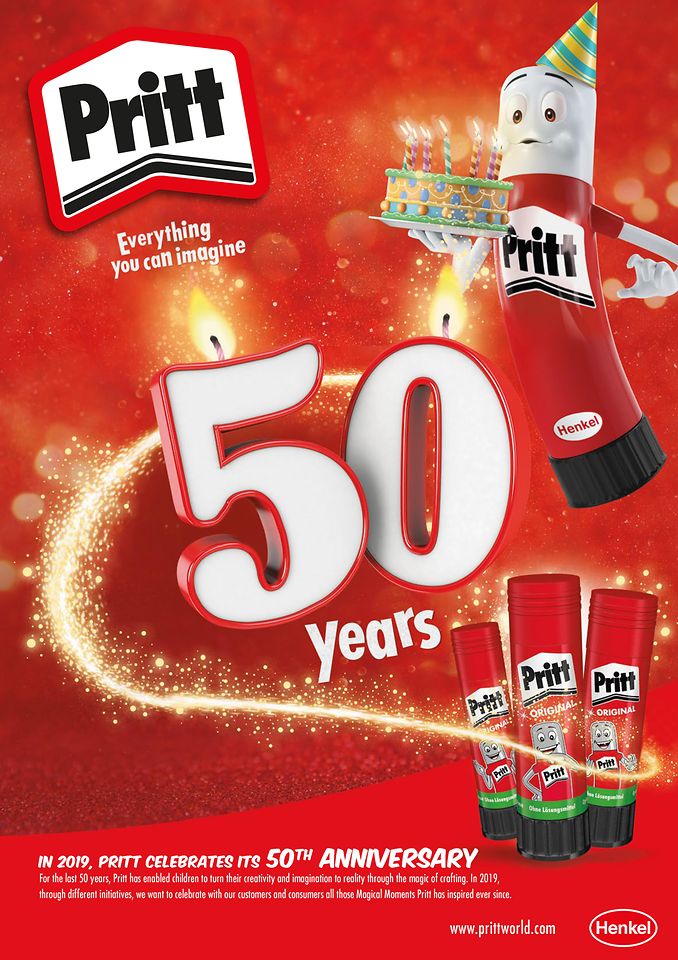 Children as the brand´s core: Since its creation in 1969, the Pritt glue stick supports the development of motor and creative skills of children through glue crafting related activities in school and at home.

Children as the brand´s core: Since its creation in 1969, the Pritt glue stick supports the development of motor and creative skills of children through glue crafting related activities in school and at home. 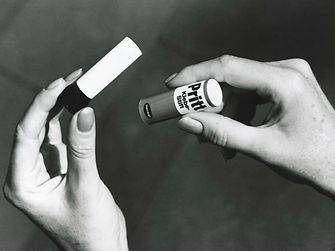 The simple twist-up mechanism of a lipstick served as a model for a revolutionary idea.

The simple twist-up mechanism of a lipstick served as a model for a revolutionary idea.

50 years of brand success – Henkel has continuously improved the quality and formulation of its glue sticks.

50 years of brand success – Henkel has continuously improved the quality and formulation of its glue sticks. 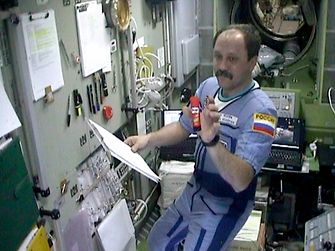 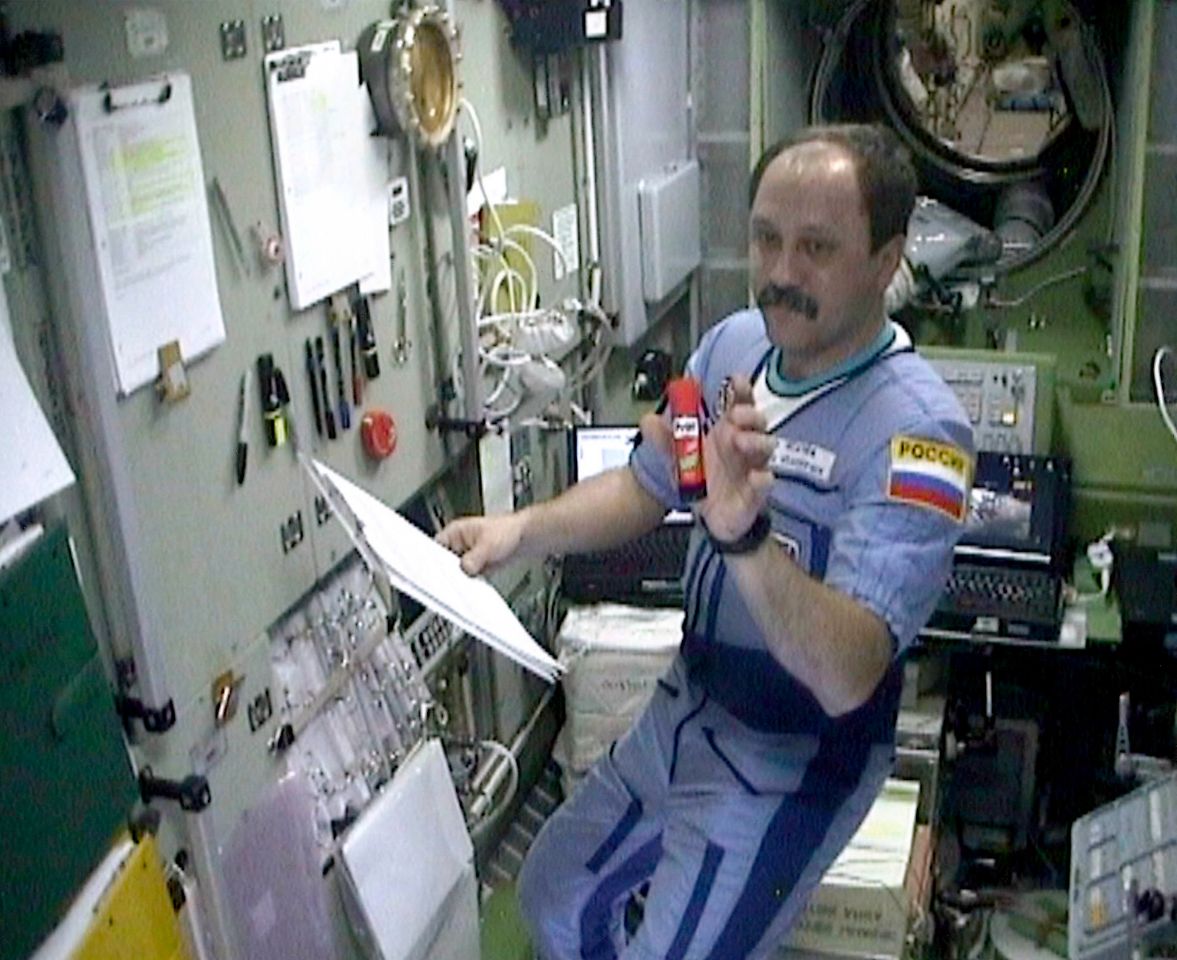